Glamping 6 – Revenge of the Glamp

Yesterday was the last day of Boardmasters.  Awwwwwww. It was also the last full day of our holiday and I couldn’t be sadder.

It was our first time away as a family and there’s been a lot of new experiences for the girls. They got fully into the festival spirit.

(Art. It’s a matter of taste and what you find on the floor nearby)

They found out they didn’t like being on mushrooms.

And they got to play on a beach that wasn’t entirely populated by used needles and heroin addicted seagulls.

Lucy and I made some discoveries about ourselves as well. We realised we don’t need sleep to function effectively as parents AND if I fill the toiletry bag with water, soaking all of our toiletries, Lucy is legally allowed to force the bag into me while I am distracted.

Plus I got to close the comedy for Boardmasters.

(You can smell that festival funk from here. A mixture of lynx, cider and shame)

I loved it and even though I had a bit of anxiety, performing 4 times over 3 days to crowds who may or may not have seen me before, I shouldn’t have. I had people coming up to me during the day and after shows asking when I was on next, telling me how great I was and proposing same sex marriage.

The highlight was a couple coming up to me after I’d Headlined and saying “We just wanted to meet you because you’re going to be big”. A whole truck load of amazings. 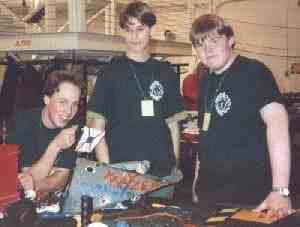 (And helps to wash away memories of THAT haircut)

Two months ago I was seriously thinking of giving up comedy because I didn’t think I was good enough, I’d listened to a rival’s criticism,  and this weekend I headlined an international music festival so I wanted to give some advice to comics who are having self esteem problems.

Fuck everyone else. They aren’t you. They don’t know what you can do. They will tell you their way is the only way because they are so insecure and they need to make themselves feel superior. You do this your way and you do it well. Pour everything you’ve got into it and when you think you’ve given it everything you’re halfway there. In the end there is you and there is the audience, you’ll find each other eventually. Screw everyone else who tries to bring you down. If someone is trying to bring you down it’s because you’re already above them.

(Got to work on that catchphrase)

This month I’m performing at 4 different festivals. One of which is Moto GP. So yeah, I’m kind of a big deal.

If you’re not going to be at a festival this month check my “Upcoming gigs” page to see where else I’m performing.